I've just yesterday finished watching ABC's Speechless. And to be honest, I already miss it. I discovered it because of Robyn Lambird, the youtuber girl I've mentioned in a previous post, and also Zach Anner, who we obviously need to talk about here as well.
So, Zach is one of the funniest youtubers I've come across, who also happens to have CP and features it in genious comedic ways. I won't give you spoilers. Check himself out, here's his channel, you're welcome.
Fun fact: Zach ended up making an appearence on the show as - putting it in Maya's words - future JJ.
Here's Zach's video on it:
Speaking from a personal point of view here, I must say I had never watched any series before where a charatcter on a wheelchair was portrayed, appart from Glee, I just remembered. And as for Glee, I must state here that I personally think Artie was really undevelopped and underrated.
What's different here though is mainly the way the series is constructed, I think. The way JJ's CP is always there, but at the same time it is such an usual situation, it almost becomes a background matter, unless some new (frequent) challenge comes up.
And, lets face it, the brilliant part of this, is how it actually ressonates with how our daily life goes, having CP. It's all very real to me. And so funny because it actually is so true. 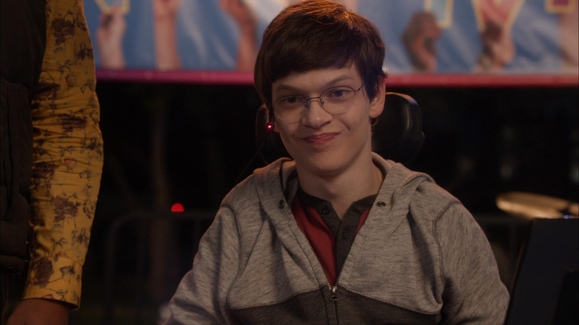 Another thing I must point out too, though, is how I came to notice that by frequently watching JJ and his cerebral palsy padrons, spastic movements and facial expressions while finding him so funny and cute (he even plays that to his advantage), there started to grow, let's call it a self esteem boost imprinted in me.
By more and more observation through others, CP's typical traits are slowly making its way into things I consider make us unique and give us a hell of a character... and I also must admit learning to play cute to my advantage may come in very handy, so thanks JJ DiMeo!
Obviously the fact that that Micah Fowler who plays JJ actually has CP makes it even better, because he is part of the crew, he actually knows what it's like. And I must say he is a hell of an actor, being on a different part of the spectrum, less severe than JJ, and having altered his physicality in order to create the character. It's a really well played role and not an easy one, being so funny by using only facial expressions. 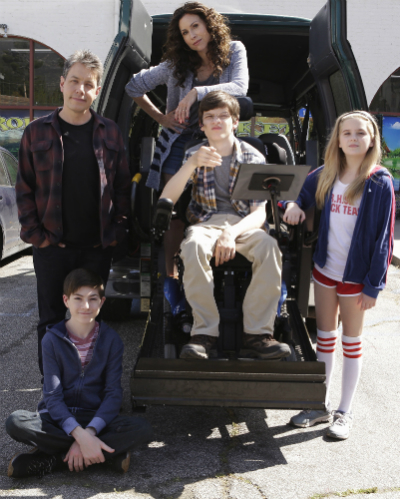 Maya, played by Minnie Driver, the "special needs" mom, is completely hilarious. And even though she is a bit extreme to say the least, there are a lot of truthful situations about her that make us identify with our own family life at some point, I suppose.
But it's not only about the inherent identification part. The differences about it also make it very interesting and quite reflecting inducive.
For example the dad, Jimmy (John Ross Bowie), and  his consistent emotional denial adding up to a hoarding tendency contrast with Maya's over the top momhood.
Mason Cook, who plays Ray DiMeo, brings up important topics on all of this as well: the share of parents' attention, the concerns with JJ's future, all this topped with his constant anxiety and desperate romantic situation, frequently mocked by his sister Dylan (Kyla Kenedy) who is a compulsive winner and sarcastic gem.
Kenneth (Cedric Yarbrough) is the cherry on top. If the fact that he's an unexperienced jannitor who from night to day just starts being JJ's aid with no experience whatsoever doesn't make for a cracking plot already, let me tell you he is the perfect funny sidekick to, well, everyone in the family really.
Above all, it is an awesome comedy show, with or without the cerebral palsy theme being taken into account. But having it represented in such a natural non pitty-party way, I think will help us all destroying stereotypes. And unexpectedly, like I mentioned, not only change society but also maybe help some of us accept ourselves as the cute little actually not so limited bastards we are, and that is one of the best bonuses we could ask for!